The world we’re living in is quickly adapting to technology. Last year, Tesla rolled out the world’s first affordable smart car, the Model 3 and have delivered just under 200,000 cars of over 400,000 pre-orders.

In business, technology is shifting just as fast. Starbucks announced it planned to shut down all of its Teavana stores across the nation and shift to a more digital focus. Even the popular women’s brand ‘The Limited’ shut down its doors and went to an exclusive online store.

Why Is This Happening?

Let’s look at some stats to help understand the shift of the online world.

Looking at these stats can be overwhelming, but it shouldn’t mean that you should continue to neglect the power of online marketing. Many businesses have been through the similar process, and the first place they look to start enhancing is social media.

What Is Social Media Marketing?

We’ve all heard of Facebook, Instagram, Pinterest, LinkedIn, and Twitter. These channels are able to connect individuals with each other, and brands to their targeted consumer. Although we can write a whole encyclopedia on social media, let’s shift our focus to Twitter.

For a complete guide on Social Media 101, check out this article by Keran Smith on Lyfe Marketing.

How Can My Business Benefit From a Twitter Marketing Strategy?

Using this platform for your business has multiple benefits. You can:

Although you won’t become a Twitter superstar overnight, you should be able to see success in increments. Just take a look at where we started.

The tips and tricks we're about to give you took us years to learn and master. In fact, it's the exact steps we took to reach where we are now.

ICYMI: How To Use Social Media Competitive Intelligence To Outperform Your Competitors

Tweeting by definition is the post that is published on your account and presented to all your followers. You’re given 280 characters to portray your message; so it’s essential to get to the point within these limits.

Fundamentally, this is how you should structure a tweet. However, there are a ton of ways to tweet a message. For ideas, check out this post by Aaron Lee on Social Media Examiner.

Let's take a step back for a moment and highlight the importance of hashtags. As previously mentioned, this simple keyword has the ability to connect you with your target audience while generating greater awareness and positions your tweets to potentially go viral.

In a strategic Twitter marketing campaign in 2018, Heinz was able to generate 1 billion Twitter impressions in 48 hours using a combination of tactics that included hashtags and polls. Click here to read more about it.

Now we all know everyone is using them, but how do you find them and know which one to use? There are two ways you can go about this.

This tool is a digital marketer's best friend. When posting on Twitter, it's hard to pick the two or three hashtags you're going to use. With Hashtagify, simply enter a keyword and the tool will pump out related and popular hashtags.

Take the image above as an example. We entered the term 'social media' and list of keywords were presented to us. Now pick the hashtags that are both relevant to your tweet and have high popularity. One of our favorite tools to use is SEMrush, (check out the complete review we did of the tool here). With their social media tool, we simply enter in the Twitter handle of a competitor, and the tool finds the proper social channels.

Digging a little deeper, we can analyze the hashtags our competitors use in their tweets. Here's how to evaluate this data:

Who is your Audience?

The easiest and most common mistake in digital marketing is to "go through the motions". You're doing all this great work, but you forget some critical component.

It's like running a marathon but then stopping right before the finishing line...

With Twitter, it's easy to lose sight of your audience. You can publish all the great content you want, but if no one is going to see or read it, it's practically useless (nullifying your twitter marketing strategy before it even started.)

However, don't worry. It's easy to generate insight on your Twitter audience.

The first element to look at is your audience's activity. There are a ton of tools out there that can give you this insight, but our favorite is an app from Moz called Followerwonk.

We can tell clearly from the image above that our audience is the most active at noon, eastern standard time. With this information, you can get in front of your audience at the exact moment they're on, increasing the chances of getting more traffic and awareness to your website.

Remember, we're using Twitter, so you can post more than once throughout the day and even the hour. Just make sure you don't come off as spam.

It's great to know when your audience is active, but that still doesn't give us enough insight. What if they're not high quality followers? The better the audience, the better engagement your profile will see.

We turn to Followerwonk again for this data. Their easy to use tool highlights the most frequent keywords in the bio of your followers.

As Alex York once explained, "Twitter engagement rate is a key performance indicator (KPI) to evaluate just how well you interact, reach and become a presence with your audience." These interactions can come in the form of (to name a few):

Out of these eight, the three key engagement metrics to look at are retweets, likes, and replies.

These 3 metrics are the building blocks of engagement; the rest typically follow after one of these actions are taken.

For an example, we tweeted an awesome new blog post and was retweeted by ten other people; those engagements (10) now boosted the tweet's awareness and could potentially lead to more new followers, link clicks, etc.

What's A Good Engagement Rate for a Twitter Marketing Strategy And How Do You Measure It?

There are two ways you can measure engagement rates. The first is just a baseline to measure, and the second is a complete equation to help determine engagement rates for different sized accounts

Note: total engagement = sum of all likes, retweets, and mentions

In this example, we can see that Business 2 has the most Twitter followers. Compared to the other two, they don't tweet as often as Business 3 and slightly more than Business 1.

However, the main thing that sticks out is that Business 2 has the lowest engagement rate.

What this tells us is that even though they have the largest followers, they're doing something less effective than the other two businesses.

Maybe they're not posting tweets that are humanizing, or it could be that they're posting their message at the wrong time. The point here is, no matter what size your audience is, it comes down to engagement.

*Quick fact: did you know when brands search for influencers, they measure off engagement?*

So how can you "boost" engagement? We'll share with you some of our favorite tips and tricks.

Twitter is a platform to start conversations and connect with your audience, usually on current topics that are relevant to your audience. As a growing business, you might not have enough followers on Twitter to gather much visibility. Twitter influencers can help you reach a broader audience and get noticed. My tip for growing businesses is to find the right Twitter influencers and leverage them to grow your Twitter presence.

Click here to follow Shane Barker and be sure to check out his marketing insight at shanebarker.com!

Be human and conversational. Imagine you’re chatting with people in real life. It’s all too easy to lose that human connection behind your phone or computer screen.

Ian Anderson Gray when asked " Why is it important to have a strategy of acknowledging your high-value, engaged community members?" on the #TwitterSmarter chat

Customize all the elements of your Twitter profile. Your header image is another place you can use graphics for character, and your actual text bio is an excellent way to both add a couple keywords for SEO relevance and write an organic description of who you are. Appeal to your audience!

Customers definitely feel more of an affinity with a brand when it’s relevant and on-trend with the things they care about, and the real-time marketing we see from brands often shows some of Twitter’s biggest success.

The bigger and more competitive Twitter gets, the more important it becomes to really focus your energy on posting smart. The best thing you can do? Know what to post and when, and never post anything just once.

Listening to influential users in your industry and then connecting with them is a great way to build relationships. To do that, you can either create your own Twitter lists or follow lists that have already been created.

Try to retweet a few people every day, particularly users you haven’t retweeted before. The larger your social presence, the more of an effect it will have on them, and the more likely they will be to join your community in return.

One mistake marketers make when they tweet an article is to simply use the headline, which can be a little boring and seem lazy.
Instead of tweeting the article using headlines generated automatically from a blog post, I put more effort into the descriptions I write in my tweets, especially for my own blog posts.

"Concise character count (although bigger than before) encourages brevity. Great soundbites that have impact. Also hashtags - easy to build a community around the event. At my recent content planning event Content Live we chose to build our event community around #2019sorted - it's still going!" - Janet Murray on what makes Twitter a great platform for promoting your business events

"When you’re thinking about using social media for lead generation, you want to use Twitter as not only a conversation channel, but also as a way to drive traffic to your content. I found a significant increase in traffic from Twitter and engagement with our account when I posted several tweets of a blog post rather than one the morning. It gives your followers a chance to catch that link if they missed it the first time and also targets people in different time zones."

We won't overwhelm you with too much more information, (so make sure to subscribe to our blog to get the latest digital marketing tips and tricks!)

Here are 10 questions you can answer to quickly can get the most out of your Twitter profile.

Twitter isn't a race to see who can get the most followers or the highest engagement. It's about connecting to the right target audience and getting your message across.

The tips and tricks listed above helped us generate over 130,000 social followers while increasing traffic to our website, and helped establish us as a thought leader in the digital marketing world.

For more reading on how you can make an impact with your online marketing, see the links below: 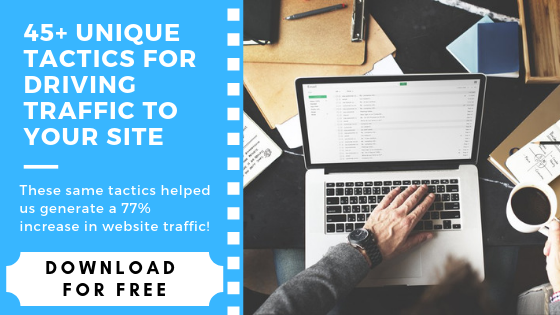