Content Marketing Is Shifting In 2018: Here's What You Need To Know

Posted by Nicholas Dimitriadis on Mar 15, 2018 10:29:10 AM
In a recent report by Steve Rayson of Buzzsumo, he starts with the this point, "If you’re sticking with your content approach from 3 years ago, it’s now 50% less effective."  Well, that got our attention and hopefully yours as well!  2017 was a year of great change for content marketing, and these changes will definitely be impacting how we do business in 2018. 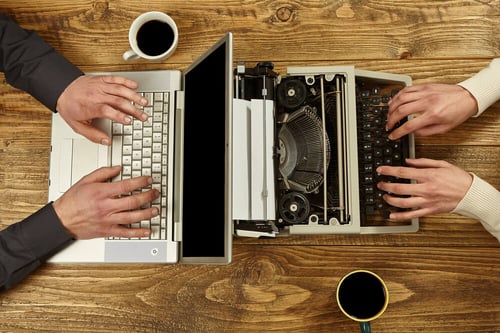 This report provided a significant amount of key points.

Here are the highlights:

Content marketing is arguably one of the best ways to increase your visibility, build your authority, attract your audience, and strengthen your brand. It is for this reason that everyone today is using content marketing (and so they should), but here lay the issue; all this content is causing extreme saturation, making it extremely hard to stand out in the crowd.

The above is even more prevalent with trending topics. Let’s look at bitcoin for example. The topic of cryptocurrency gained significant traction towards the end of 2017, so much so that there were +40K articles being posted per week.

This is not exclusive to Bitcoin, similar patterns exist with every topic that gains popularity for a period of time.

It would seem that the only way to overcome this would be to establish yourself as an authority before the viral outbreak, just like CoinDesk did, but more about that later on.

Social Sharing Has Fallen 50% in the Last 3 Years

Content saturation does not only affect visibility and engagement, it also affects content’s ability to be shared with others via the already heavily saturated social platforms.

Using a sample of 100 million posts from 2017 and comparing it to their sample from a 2015 study, Buzzsumo found that median shares had fallen from 8 to only 4 in the span of 2 years. This undoubtedly shows that it is increasingly harder to gain shares and engagement. But why is this happening?

As we mentioned before, as a topic gains traction, more creators pile in to leverage its popularity. This is due to content shock, where audiences just have so much of the same thing, they get overwhelmed, and creators just get lost in the crowd.

Recently, Facebook took a step towards reducing the reach of branded content on the platform, prioritizing posts from friends, families, and groups. This has also significantly affected referral traffic, as we will see in the following paragraphs.

For some, sharing content privately via email to their contacts, colleagues, and peers was the preferred choice. This is starting to gain traction once more with private messenger apps (such as Slack, Messenger, Viber, WhatsApp, and WeChat) becoming more prolific, even surpassing social giants such as Facebook and Twitter. 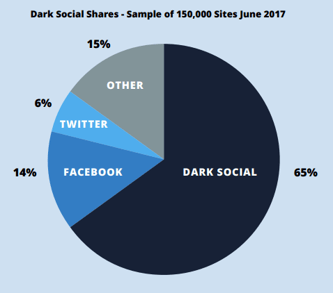 From 2013 to 2015 social sharing saw a steady increase, until 2015 where it managed to surpass even Google. This of course led marketers to shift their focus towards social networks for traffic and sharing, at the expense of SEO.

However, as times and people change, so do trends. In 2017 social referrals begun losing ground drastically, and Google sites now send double the traffic to publishers in the Parse.ly network 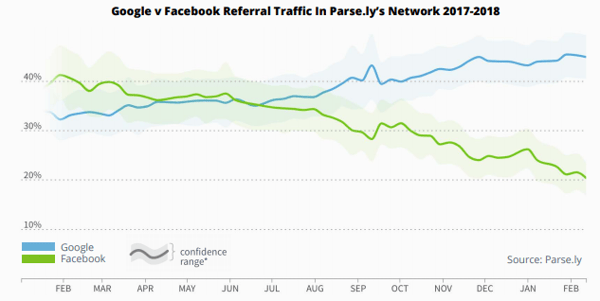 From research conducted by Hubspot, we can see that people are starting to find content through a plethora of channels beyond Google and Facebook. 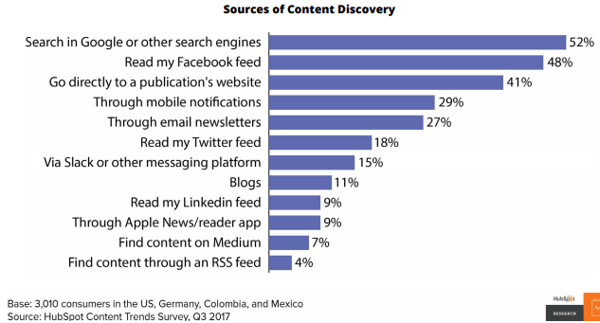 This means that we need to be more cognizant when creating a distribution strategy for our content. We need to know what alternatives exist and how to leverage their power to overcome the hurdles of saturation.

But Is It Really All Over For Content Marketing?

…Absolutely not! Content marketing will continue to thrive, but in order to leverage its power we need to change the way we create and distribute.

A Shift Towards Quality

According to Buzzsumo, certain websites have not only remained competitive amidst the influx of content shock, they also saw shares rise. Such sites include the Harvard Business review, the New York Times, and the Economist, all of which have seen a significant rise in the number of shares over 2015 and 2016.

It would appear that the rise in content saturation has not adversely affected websites that provide solid, value driven content. In actuality it might have even helped them reinforce their position as authority figures in the market.

To quote Steve Rayson “If you are going to share something with your audience you want to make sure it is well researched and authoritative from a trusted source, thus it is possible people are more selective in their sharing.”

Now you might be thinking that of course these sites wouldn’t be affected, they are massive with worldwide fame, so let’s look at a more recent example.

CoinDesk focuses on blockchain and cryptocurrency information, which as we saw was a topic that was immensely saturated towards the end of 2017.

While it too took part in creating dozens of content pieces during that time, it had one competitive advantage; it had already established itself before the upsurge.

So with an already strong position, it was seen as an authoritative site during that period, and was able to stay competitive and not be drowned out by the others.

Steve continues to say, “Tapping into changing audience interests and leveraging trending topics remains a key part of any content strategy, but the key is to build your authority early and be consistent in publishing on the topic, rather than a “me too” late entrant.”

Turning to LinkedIn for Shares

With social engagement plummeting on Facebook and Twitter, many B2B marketers are beginning to see a rise in LinkedIn social sharing. Let’s take another well known publisher for example. 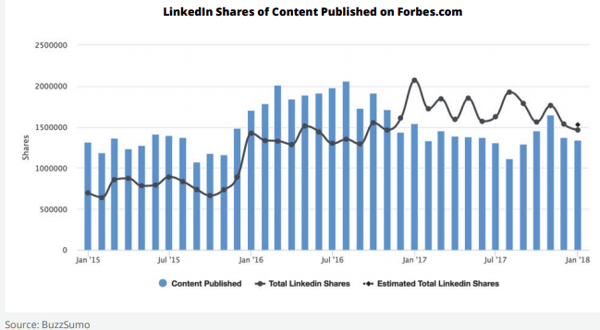 Backlinks Continue to Be Important!

In their 100 million post sample mentioned above, Buzzsumo found that the median number of backlinks during 2017 was 0, and over 70% of all content published is never linked to, from another domain.

While this is concerning, it does tie in with what we just said above; authority.

As we have previously seen, and as Steve Rayson emphasizes once more, authoritative sites with value driven content see a consistent gain of backlinks. 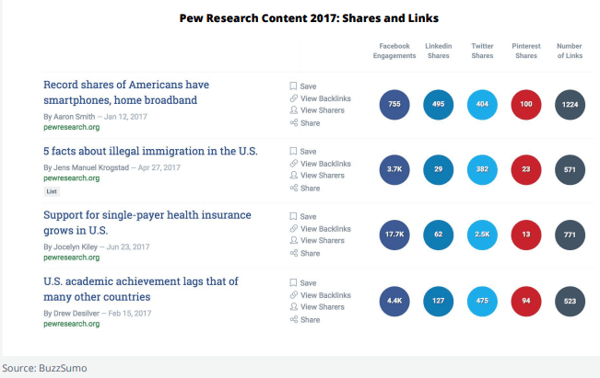 Despite the decline in social sharing of trending posts, there is one type of content that stands the test of time, and that is evergreen posts. In fact, these too were inversely related to the effects of content saturation, as they saw consistent shares and linking.

Why are these types of posts performing better?

So, after reading all of the above, what are the key takeaways we as marketers and content creators need to know?

Despite its saturation, social still is a very powerful medium for engagement and brand reputation. Remember, social sharers and links are only two pieces of the metrics puzzle, you also need to focus on traffic and conversions in order to be successful. Having clear objectives will also help you stay focused on which metrics matter the most.

2. Don’t rely on Viral Content and Clickbait Headlines to Get Shares

Viral topics may be enticing, but don’t lose focus of what your audience needs, and wants to hear from you. You can’t be everything to everyone, and going after viral topics that are irrelevant to your audience will only make you lose your focus. Additionally, we saw that not only are social platform changing, audiences are also tired of the same “clickbait” posts, and crave higher quality, value driven content.

3. Find Emerging Topics Early and Establish Your Authority Before the Trend

You need to constantly strive to build your reputation and be the go-to source of info for audience regardless of trending topics or not. This was exactly the case for CoinDesk as we saw earlier.

Furthermore, constant research and in depth knowledge of your industry will help you spot emerging trends as they come along, and begin talking about them before they become saturated with content.

The earlier you spot an opportunity, the longer you will have to establish your authority and reputation. To find these trends, use tools such as Buzzsumo and Google Trends to see what is being talked about, what questions are being asked, and monitor their progression and evolution.

In a world where content saturation is prominent, purely organic strategies will fall short. It is therefore imperative that you incorporate a paid promotion in your distribution strategy. We will be covering these topics in the weeks to come, so stay tuned for more insight.

Having said the above, SEO is still immensely powerful, but needs to be used correctly in order to be successful. With search engines becoming smarter and smarter, there will potentially be a shift from competitive, relevant keywords, to a user's intent.

What we mean is that crawlers will use the combination of phrases, words, format, etc. to determine what your piece is about, rather than rely solely on keywords.

Furthermore, as we know Google rewards authoritative content that gains links with higher SERPs which brings us to our next point.

6. Shift Your Focus from Creating More to Creating Better

Quality will always win over quantity in the world of digital marketing. Focus on creating content pieces that address what your audience is currently looking for. If it means creating 1-2 less posts per month but much higher quality blog posts and the value is there for your audience, you will be rewarded.

Content marketing is changing, so the question is, will you evolve along with it and rise above your competitors, or will you be lost in the crowd?

If you would like to read the full report, click here. And as always, if you have any questions please feel free to leave a comment below or follow us on our social channels.

For more digital marketing insight be sure to check out the links below: 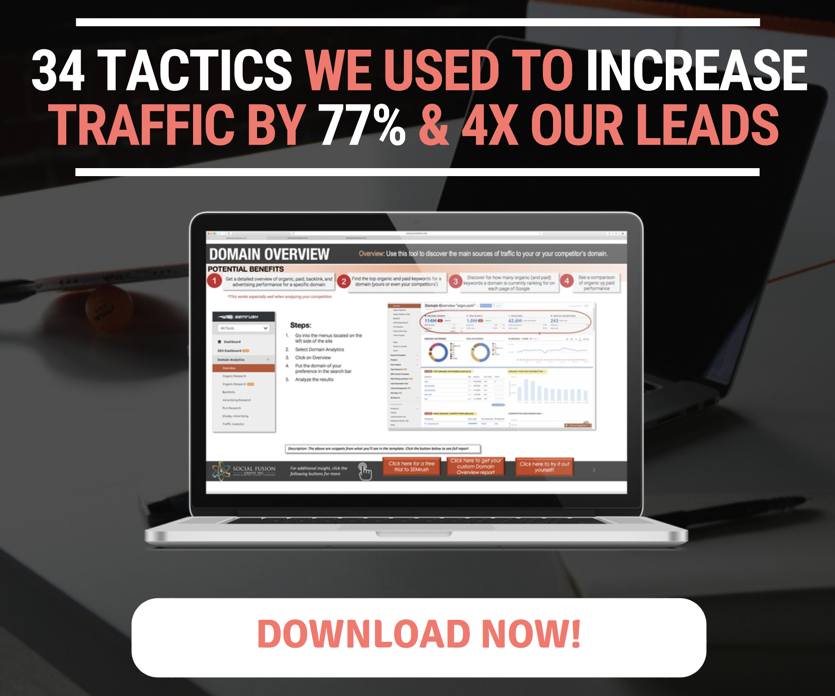